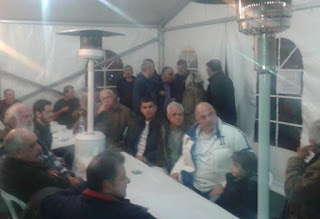 The blocking of the farmers of Magnesia, to the junction of the Mikrothives, visited today in the evening… the elected Mayor of Volos, accompanied by his associates, in order to express its sympathy and support to the righteous struggle, on the streets in extremely adverse conditions, “both for themselves and for Greece itself and the country, against the impoverishment and the impoverishment that this insurance will result in swathes of society if it is passed” as stated in the notice, which arrived in e-Volos.gr.

“We are close to you and support you human, like all of our fellow citizens who are fighting for the just demands of them,” said mr. ÎœÏ€Î­Î¿Ï‚, who made it clear unequivocally that his presence there has not been any political, much more partisan, feasibility.

The farmers who were there welcomed the Mayor of Volos with warmth, and thanked, by the trade union leader, Create Spathi, for sympathy, while they expressed the belief that it will emerge victorious from the struggle because it is struggle for survival of themselves and their families.