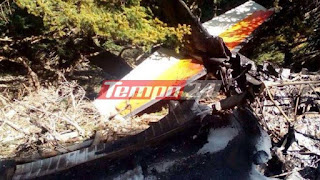 Thrice holy will be celebrated on Wednesday morning at the… scene of the tragedy with the victims both dead, Î±Ï€Î±Î½Î¸ÏÎ±ÎºÏŽÎ¸Î·ÎºÎ±Î½ at the drop of a single-engined training aircraft Cessna when it crashed in the mountain of Helmos. Kalavryta mourn the loss of 32Ï‡ÏÎ¿Î½Î¿Ï… Sotiris Antonopoulos. The experienced pilot descended from the ÎœÎ¬Î½ÎµÏƒÎ¹. Son large,with seven children,the family,the late professor and former president of the Municipal Council of the Municipality of Amaroussion ,George Antonopoulou,brother of his Eminence, the Metropolitan of Argolis, Nektarios (Antonopoulou). Uncle the tragic death of Ï€Î±Î»Î·ÎºÎ±ÏÎ¹Î¿Ï, indeed, had planned to attend the thrice holy, but a sudden indisposition does not allow the trip. In the morning at the scene of the tragedy, is expected to attend relatives and friends of the two families, Priests, Archimandrites, and representatives of the municipal authority, operators and authorities. This is the point of the tragedy where it crashed and found the fatal cessna, as you wrote last tempo24.gr. Already experts are investigating the causes for the fall of the aircraft, the time of the fall at the point of impact, and, of course, if there was a mechanical failure.
In accordance with the result of the autopsy as a cause of death, it is the charring.
The bodies of the two pilots cannot be recognised, and for this reason, the identification will be done by the method of DNA.
According to the coroner, and the two sported injuries, however the cause of their death is by fire, which occurred on the plane after the fall of the. H recognition of the bodies was impossible as they were charred by the fire that broke out in the aircraft, in all probability, with the fall of the ground.
Thus, only through examination of DNA, which is expected to be completed in the next 10 days, you will be able to get the recognition.
The second crewman who found a tragic death is a 50-year-old man from the area of Xylokastro, such as report information.
The family of the man wishes to remain hidden the evidence of his identity, and that have not been made public more details.

The experienced pilot of the fatal Cessna, in 2010, had flown through the canyon of Vouraikos and had even recorded and the flight, which he posted to his personal youtube account.
The 32-year-old was serving in the 384 Squadron search and Rescue as a pilot of helicopters Super Puma. The death has plunged into mourning the armed forces.