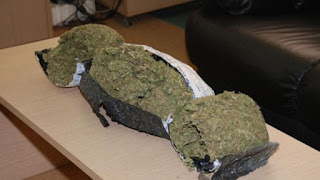 A large quantity of drugs, and specifically cannabis, has been identified in storage in the Arches of Egialia…
In a police operation that happened on Sunday afternoon, in the presence of Da, were found and seized approximately 8 pounds of cannabis and a precision scale.
The men of the Department of Narcotics of Patras, to gain from the information and arrived at the revelation of traders – traffickers of drugs, proceeded to the arrest of three persons of Albanian origin, a 33Ï‡ÏÎ¿Î½Î¿Ï… and two 27Ï‡ÏÎ¿Î½Ï‰Î½.
In the investigations that followed in the cars property of the arrested and houses were still 21 grams of a controlled substance.
In accordance with information of the tempo24.gr, this is for residents of Kamares, which Î´Î¹Î¿Ï‡ÏŒÏ„ÎµÏ…Î±Î½ drugs in the wider area of Aigialeia.
The charges they are facing are those of trafficking and drug trafficking.