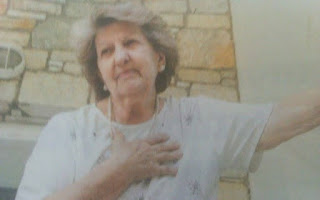 Coil stole the cell phone of the mother of the prime minister when the Excellent Tsipras visited the cemetery. The race and the business in apartment building in Ano Liosia…
A victim of theft fell last Friday (21.10.2016) the mother of Alexis Tsipras, Excellent according to an article in the newspaper Freddo. He had gone to the cemetery of Athens, and when he left, he realized that inside the small purse she had with her, there wasn’t a cell phone.
When she returned to the house of the Dionysus called the security of the prime minister, that temporarily and until to buy a new one, you won’t have a cell phone because it was stolen.
Immediately sound the alarm and police officer of safety of the prime minister notified headquarters to start… in a race to find the iPhone of our High-grade ” in order not to “fall” into… the wrong hands and possibly disclosed sensitive personal data or family photos of the family”.
With the electronic means of INTELLIGENCE and Prosecution of E-Crime, as stated in the publication, the position of the mobile of the mother of the prime minister’s been spotted in a detached house in Ano Liosia on Sunday afternoon (23.10.2016).
As it was found, the perpetrator of the theft was a young man (26-28 years) Roma, which, along with other people had set up coil that was stealing cell phones out of cemeteries and hospitals. With a prosecutor’s order became a home business in Ano Liosia by officers of the ÎŸÎ ÎšÎ• and executives of the department of Burglar Security.
The cell phone was found after the young man was going to sell it Monday. The device was delivered to the mother of the prime minister, who thanked the officers but told them that “there was no need to go into such a procedure”.