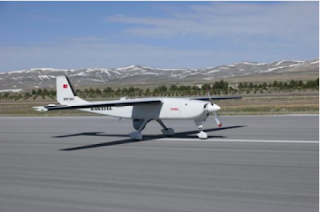 On 24 December a workshop was held with the theme of developments in the field of construction and development of the UAVS which are manufactured by Turkish companies, the…
which was organized by the State secretariat for the Defence Industry in collaboration with the Supreme Executive Committee Defence Industry (STM-SAVUNMA TEKNOLOJILERI MÃœHENDISLIK) and the Foundation for Political, Economic and Social Research (SETA-Siyaset Ekonomi ve Toplum AraÅŸtÄ±rmalarÄ±) in which participated representatives of the 3 companies that manufacture UAVS (TAI with the UAV ANKA, BAYKAR with the UAV BAYRAKTAR and VESTEL with the UAV KARAYEL).
During the presentations by the representatives of the companies the SÃ¼ha Ã–zgÃ¼r DinÃ§er, Deputy General Director of the company in VESTEL SAVUNMA of the homonymous Group of companies, which manufactures the tactical UAV KARAYEL announced that the company will present the “armed” version of the UAV in May 2016.
The above announcement comes after the announcement of the company BAYKAR (manufacturer of the UAV BAYRAKTAR already joined business in the SDF), that was held on 17 Dec 15, successfully shot anti-tank missile (also Turkish construction company ROKETSAN) from a distance of 8 km and at a flight altitude of 16,000 feet.
The above developments demonstrate the continuing evolution of Turkish companies in the field of the development of UAV which convert then to armed (UCAV), as well as the immediate reaction to the difficulties that have arisen in the construction of the UAV ANKA in the FILM, all of which are associated with the engine.
Source