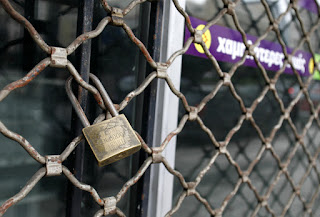 “Good-bye” to the active action was every day of the semester…
spent 2,5 craft enterprises in Thessaloniki, on average, according to research today published the Chamber of Crafts (th. I. I).From the beginning of the current year, and until
30 June, in a suspension of operations were 459 companies, while start made just 188. “And all the time the… branded padlocks are constantly rising, while the bankruptcy code is the only way for companies” underlines the administration of th. I. I.
While the padlocks remain hundreds, during the period January – June 2016, the write-offs were reduced by 35%, compared to the corresponding period of last year, while the openings of enterprises increased by 17.5%.
“However, is anything but optimistic they can qualify these rates, as well as the padlocks in spite of the restriction, compared with last year’s corresponding period, demonstrate that the tendency to “escape” from the business has not decreased, but the number of companies has shrunk. At the same time, few are the brave who are entering the business arena, with the majority of these to choose individual firms (125 out of a total of 188 entries), although, as is apparent from the data, are the …usual suspect of write-offs. It is characteristic that at this time, rolls downloaded 350 individual companies,” notes the president of th. I. I, Papadopoulos.
Over 300 were found to be unprofitable, and four went to the wall
Unprofitable were 314 companies, while four were driven into bankruptcy in the first half of 2016, with the total of write-offs to reach the 459. A year earlier the number of firms who have moved to delete from the register of th. I. I was 706, while the number of Î±ÏƒÏÎ¼Ï†Î¿ÏÏ‰Î½ 371 and the winding 14.
“The negative situation in small business, translates through the records and write-offs of handicrafts of Thessaloniki.
The bleeding in the world of business continues, the private initiative is sinking and the makers whistle casually, shifting the public debate to other issues, of minor importance in this period,” notes the president of th. I. I and A vice-president of the Central Union of Chambers, P. Papadopoulos, stressing that “the present economic policy of the government with the ruthless Ï†Î¿ÏÎ¿Î»Î±Î¯Î»Î±Ï€Î± and the lack of planning for the productive reconstruction of the country, destroys entrepreneurship, has a negative impact on every worker, distorts the functioning of the market and leads to a dead end and healthy companies”.
The capital controls, “unknown how long they will stay”, they have also created a number of problems in the business community.