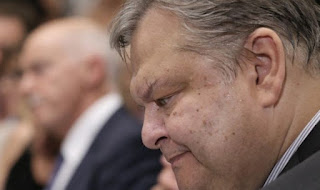 Harsh criticism…
the government for their handling of the issue of the economy, made from Ioannina to statements by Evangelos Venizelos, while he stressed the necessity of another government of national cooperation of all democratic forces with a european orientation, with the participation of SYRIZA after the defeat of the features as mentioned.
In particular, in response to a question on the evaluation and the fluidity of the situation in front of the Economy, said that the problem of the economy is political. “The government,” he added, “with its existence and with a regular following, it multiplies the problem. Chasing her tail. Close – does not close the assessment, meanwhile, collapses in the real economy, and sinking again to the crisis in the country, and ought, to have come out of the 2015 by the memorandum and to have been in another status.
“That which is urgent at the moment, is to provide the country with rhythm and strategy. With the government well and with the House, this will not be achieved.
“We need another government of national cooperation of all democratic forces with a european orientation, with the participation of SYRIZA after his defeat and after he goes in the sizes that need to go due to the damage it has caused, but it’s not enough to have another government, we need the government to implement the only responsible and feasible national strategy, that we have embarked upon and it has been proven that, it is the only one who can make the country, from spinning”.
To a question about whether asking for elections replied:
“No one expects elections, when a parliamentary system the election determines the government, in fact, it’s kinda pointless. If he had a sense of responsibility, mr. Tsipras, we’d have had elections by the day before yesterday”.
Mr Venizelos, arrived yesterday in Ioannina, greece, and today was a speaker at a political event with the theme, “The place of Greece in a Europe challenged”, organized by the Circle of Ideas for National Reconstruction.
The event, attended by the mp of Ioannina, greece the new democracy, Kostas Tasoulas.