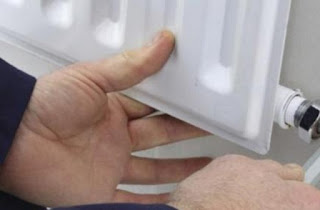 Problems of the low temperatures occurred in the last few days on a radiator for oil and natural gas, because it froze oil and water, as in… solar water heaters, mentioned in the “Radio 102,5″Themis Arhontakis honorary president of the Association of Contractors, Electricians and Restorers Burner. Magnesia.
“80% of the problems presented by the freezing of the oil in the radiator,” said mr Arhontakis, who explained that due to the paraffin it contains, freezes and becomes like butter… he himself said that these days, the… hair-dryer took “fire” to warm up and to have the oil flow.
The remaining percentage of failures in heating systems, came from the water that froze, and the lack of water pressure, which could not be released in the radiators.
Problem on the upper floors
With regard to natural gas, mr. Arhontakis said that there was also a problem on the upper floors, due to a lack of water pressure, while in lower floors froze the water. He said that if the pressure of the water in the gas, is less than 1 bar and not fill someone’s water, it doesn’t work the heating system and it stops for safety reasons.
Mr. Arhontakis said that if you climb, the temperatures will return as the water thaws and the oil and asked the consumer to always the prevention.
Needs tuning and anticoagulant
As mentioned, these problems are not due to poor maintenance, but the fact that someone in the supply of oil doesn’t put in special conditioner and thinner oil, so that with low temperatures, do not gel and has a natural flow. Mr. Arhontakis said that the basic cause of the evil, it is the poor economic situation, as there are fellow citizens that are supplied with the tank and I don’t have money for brew.
With regard to the natural gas highlighted that because in Greece is a relatively new fuel, the individual boilers are placed on the terraces of the apartments and in contact with the weather, while in the other countries are placed on the inside. The honorary chairman of the conservators , pointed out that on the terrace located, can someone make a tasteful and specifications panels, so that the boiler is ventilated and there is no problem with the temperatures, however, and this is something that involves financial costs.
Problems in the solar
Finally, problems have been observed in solar water heaters, that they weren’t running water due to the fact that it froze the water and pointed out that there are special insulation for rubber tubing that can withstand-10 degrees Celsius.
Finally mr. Arhontakis reported that in the city of Volos is not active only professional conservators, who can advise the consumer not experiencing any problems, but people who don’t know, as aliens that make them experts, but I don’t even know the name of the materials. “The world has no money and the alaloum continues,” said mr. Arhontakis.
Source