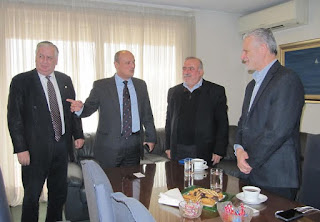 Read the announcement: “Meeting with the president of the… cyprus Movement of social Democrats EDEK Marinos Î£Î¹Î¶ÏŒÏ€Î¿Ï…Î»Î¿ and the head and representative in Athens, Gregory ÎšÎ¿Ï…Î½Î½Î±Î¼Î¬ had at the offices of the INDEPENDENT GREEKS in Kallithea, a delegation of the Movement, consisting of the General Secretary, John Fate, the director of the office of the president Dimitris Nikolaos and the Secretary of Political Planning Thymios Dew.
The president of the K.P. ISDS was mentioned on expansionism that carries the Turkey in the Cyprus, Aegean sea and Thrace, pointed out the need for there not to be agreement on the Cyprus issue, which will assign the Anchor role ÎµÏ€Î¹ÎºÏ…ÏÎ¯Î±ÏÏ‡Î¿Ï… through the Turkish cypriot leadership, the settlers or the army, and added that the Turks want solution dichotomous. With regard to the current talks, mr. Î£Î¹Î¶ÏŒÏ€Î¿Ï…Î»Î¿Ï‚ observed that should be brought to our attention not only to the regime of guarantees, and the responsibilities that will be given on both sides and expressed concern for the upgraded presence of the head of the administration of the trnc. Even reported that they have discussed 5 of the 9 chapters of the Cyprus problem, leaving out for now the Territorial, Property, Safety, and the withdrawal of Turkish troops, and he stressed that we need to see with attention the issue of property of Greek Cypriots in the occupied territories, because it is linked to the issue of the property of Greeks who were driven from Constantinople. A variety of the concerns that you developed and the responsibilities, quotas, and the powers per population that will exist in the new state institutions, focusing on the risk of arithmetic -and not only – equation to the representation and participation of both sides, while described and a number of other points which make the under discussion model is dysfunctional.
By his side the Secretary-General of the INDEPENDENT GREEKS observed that Nicosia is the last divided capital in Europe and in the civilized world, and emphasised that the Cyprus problem is not a difference between two communities, but an international issue and a problem of invasion and occupation (and yes, at the expense of a member-state of the UN, the European Union and the Euro area.) and as such should be treated he also Added that any solution must be compatible with the decisions and resolutions of the united nations, to provide for a state with a single sovereignty, a single international figure, respected the principles of International Law and the European Acquis communautaire and guaranteeing the rights of citizens and, of course, to impose the withdrawal of the occupying forces. John Doom remarked that the current head of the administration of the pseudo-state indicates a different mood, more friendly and consensual, in relation to predecessors, but this should not lead us to a spate of optimism, as well as the presence of Turkey in the occupied and in the decisions of the Turkish cypriot leadership is still crucial, either by direct political interference, either with the pressure created by the continuous presence on the island of Turkish military occupation forces. On the other hand, we must not turn our backs to any window of opportunity, which creates the conditions for a fair and sustainable resolution. He agreed with the president.P. ISDS on expansionism that carries the Turkey in all fields and added that exposures between Greece and Cyprus in tripartite partnerships with strong regional powers like Egypt and Israel, form a new axis of stability, power and development in the region. Finally, John’s Fate made it clear that our Movement is not going to accept Î´Î¹Ï‡Î¿Ï„Î¿Î¼Î¹ÎºÎ­Ï‚ solutions type of Annan Plan and stressed the sensitivity of the INDEPENDENT GREEKS in the National Issues, where our Movement is, again, the “Necessary Good”. Noting that Secretary-General of the Movement praised the.P. ISDS for the timeless patriotic position, posture and positioning, that have been a bulwark against any attempt against the interests of the Cypriot Hellenism, while he stressed the historic importance of the course and the offer of Vassos Î›Ï…ÏƒÏƒÎ±ÏÎ¯Î´Î·.
The delegations of the two parties have made, and in an overview and an exchange of views with respect, and with the internal political developments in Greece and Cyprus, and reached an agreement to strengthen even more the box of contacts, meetings and exchanges between INDEPENDENT GREEKS and.P. ISDS.”