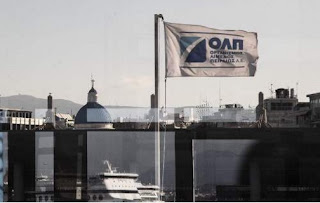 An anonymous threatening phone call on bomb, has postponed the meeting of the board of directors of the Piraeus Port authority…
The meeting was on the topic of the new concession contract between the Greek state and PPA and Thursday will take place eventually, on Thursday.
After the phone call, the area was evacuated, but after long research I found a suspicious object.
The members of the board of directors came then to the hall to meet, but after the mess that was caused, they were unable to attend the representative of the FUND, and the mayor of Piraeus.
According to the information received, executives of the BOARD of directors of the Organization expressed their dissatisfaction with the way in which happened the previous time, the consultation on the issue of privatization of the port. Also, partners of the minister of Marine and Island Policy, speaking to ana-MPA commented the following: “it Is a sad and worrying fact, that the BOARD of directors of the PPA attempted to prevent, by a threatening anonymous phone call, to carry out its legitimate institutional role”.
It is recalled that tomorrow, Tuesday, has scheduled the opening of the binding offers for the PPA by the FUND.