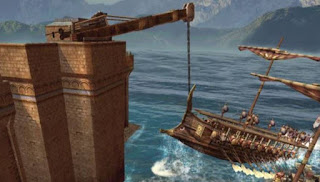 The “Beyond Science” YouTube presents you with seven incredibly ancient weapons, which is likely to not have ever heard of: From medieval chinese rockets in the form of a bird until the claw of Archimedes, for the overthrow of the roman ships that were besieging Syracuse, “grenades” with poisonous snakes, the use of corpses as projectiles for catapults in sieges (as a weapon of psychological warfare, but also as foci of infection), hives of bees as weapons and cats…suicide bombers.
Because of Greek interest, is worth an extra look in the claw of Archimedes: