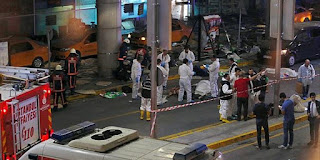 Increased the number of victims of the bloody attack on the Ataturk airport of Istanbul, which happened on the night of the…
Third. The tragic outcome reaches 44 dead after the death of one of the 260 wounded.
From the dead, “the 19 are foreign nationals”, in accordance with the minister of the Interior, Î•Ï†ÎºÎ¬Îº Ala.
Meanwhile, the Turkish police proceeded to the arrest of 13 suspects, including 4 foreigners, for the carnage, committed by three suicide bombers. The arrests were made during the attacks which were made at 16 sites in Istanbul.
It is very likely, in accordance with the Anchor, the terrorists associated with the organization of the Islamic State.
The kamikaze, who began to shoot in the airport before detonating the explosives, came from Russia, Uzbekistan and Kyrgyzstan.