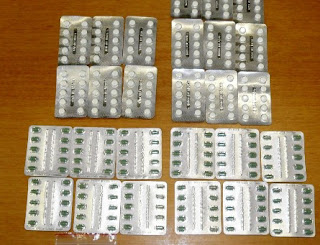 Seized, inter alia, 308 drugs, tablets, a small quantity of raw cannabis, and 4 withdrawn for medical prescriptions.
He was arrested Tuesday afternoon in the city of Volos, by officers of the Department of Narcotics in Volos, a 36-year-old accused of possession of drugs and theft.
In particular, during the police control carried out, were found in possession of 36, and seized (98) drug tablets and two medical recipes, the authenticity of which is being investigated.
As identified by the ongoing police investigation, 36-year-old during the period from (14-10-2016) to (18-10-2016), entered in the office of a physician of the city hospital, without being noticed and removed four gaps clippings medical prescriptions.
Subsequently, using two of the above-mentioned withdrawn prescriptions, deceived many pharmacists of the city and procured drugs tablets, while he attempted to cheat even a pharmacist, with the use of a photocopy of a medical prescription.
In a regular survey conducted in the residence, were also found and seized (210) drugs tablets, two scraps of medical prescriptions, as well as a small quantity of raw cannabis.
The arrested will be driven to mr public Prosecutor at first instance of Volos, while the preliminary investigation conducted by the Department of Narcotics in Volos.
Source