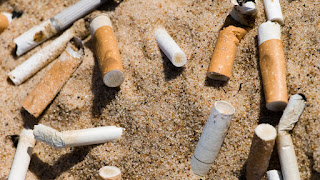 Shock causing the data presented by the president of the Hellenic Anticancer Company Evangelos Filopoulos on where and how many cigarette butts are discarded every year in Greece…
Only on beaches on an annual basis, disposed of 2.650 tons Î±Ï€Î¿Ï„ÏƒÎ¯Î³Î±ÏÏ‰Î½ causing ecological damage and threatening public health.
In accordance with the evidence presented, the cigarette butts are the most “crowded” piece of the Greek coast, accounting for 38.3% of what is collected.
And that’s if each cigarette, according to the head of the Medasset Konstantina Kostoula, each cigarette is estimated to contain about 4,000 toxic substances including cadmium, lead and arsenic.
Crossed-out cigarette butts are also â€“ together with the pieces of broken glass â€“ a potential “lighters” in the dumps with the consequence that they are responsible for the permanent fires smouldering there, which released giant quantities of dioxins.
The cigarette butts that are not extinguished and tossed uncontrollably in the countryside are due annually 1.431 fires that they burn areas of the territory.