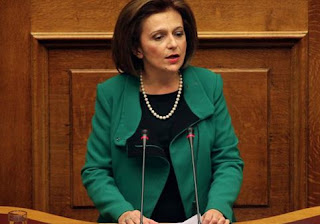 Points interview of the representative of the Independent Greeks Marina Î§ÏÏ…ÏƒÎ¿Î²ÎµÎ»ÏŽÎ½Î·… the MEGA to the reporters D. ÎšÎ±Î¼Ï€Î¿Ï…ÏÎ¬ÎºÎ· and C. ÎŸÎ¹ÎºÎ¿Î½Î¿Î¼Î­Î±:
“For pensions and insurance:
The insurance for the negotiation with the lenders is very tough. What is guaranteed is that there will be no reduction in the main pensions. The battle focuses on the ancillary so that there is no cut, or to be as far as possible the most a small decrease.
The major challenge is to become a substantial restructuring of the insurance system, to increase the income of the funds, and not to be even a cut. The desirable is not to be reductions in either the main or supplementary pensions.
The comprehensive proposal for insurance will come within the next few days and in the House. Behold field of glory bright for the opposition parties to submit proposals. I wonder for PASOK, which he blames the government, what the proposal will provide for the insurance. To remind them of the destructive intervention of Venizelos with the infamous PSI that ravaged pension funds.
The reason it was held a meeting of political leaders was why the prime Minister would like to have the largest possible consensus on issues, such as insurance and the refugee, for which there is an urgent need to provide solutions. Î”Ï…ÏƒÏ„Ï…Ï‡Î­ÏƒÏ„Î±Ï„Î±, it turned out that the PASOK, the New Democracy, and in general those who took part from the side of the opposition, it was immature to participate in this meeting.
For the proposals of the Minister of National Defence, mr. P. Burnt on the military:
There was a very big deal out of nothing. Mr. Kammenos expressed (ÎµÎ¾Ï‰Ï„ÎµÏÎ¯ÎºÎµÏ…ÏƒÎµ) a thought about a number of issues related to the ministry of National Defence. If the design goes ahead, then there will be a full briefing of the Prime minister and a public consultation, so that the parties and the citizens to be placed specifically.
It is known that the INDEPENDENT GREEKS have differences with SYRIZA on certain issues, a fact that has been accepted by the prime Minister, mr Tsipras. I don’t agree on everything.
The thoughts and the proposals of the minister of National Defense have the goal of further upgrading of the Armed Forces. Mr. Kammenos is not sitting locked up in his office, but visits the akritic and most remote outposts. The visits that it carries is not standard, it remains there and see up close the needs and problems in the Army. When he talks about military high schools and for military service of women, not all, but those who wish to serve in the Security forces, more knows.
Discussing in good faith, with regard to the recruitment of women who want to serve in the Security forces, because it will hold a weapon, I appreciate that they have done a stint in the Army, this will help them too.
The concept of military high schools is associated with the fact that many children who begin to serve in the Armed Forces or other Security forces have not received the appropriate training in order to be able to understand what it is that they will make in their life and if they can afford it. If they are given the opportunity to have a proper education, this will not help them?”