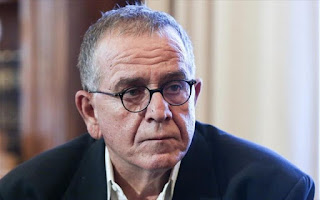 A question of creating a camp for 300-400.000 immigrants in Athens has raised the…
belgian minister of the Interior Monday in Session for the immigration in the Netherlands, as it was revealed GREECE’s Giannis ÎœÎ¿Ï…Î¶Î¬Î»Î±Ï‚.
“The belgian minister raised the untrue theme for camp 300-400.000 migrants in Athens,” stressed the deputy minister for Immigration Policy.
“The Schengen Treaty is in danger, european, Europe is in trouble, Europe is afraid of. I’m worried,” said the minister, recognizing that “it is a difficult situation for our country in terms of the refugee”.
As announced even John ÎœÎ¿Ï…Î¶Î¬Î»Î±Ï‚ the hotspots will be ready by the end of February, while the beginning of March it will be operating.
What the foreign Press
Germany, Austria and Sweden threaten with exclusion of Greece from the Schengen area, as stated in a report in the German newspaper “Frankfurter Allgemeine Zeitung” with the climate that prevailed yesterday in Amsterdam, at the European Council meeting of Justice and Home Affairs.
The publication of the FAZ comes 24 hours after the revelation of the “Times” that, Germany, Austria, Belgium, Sweden and Denmark have been given a deadline of six weeks in Greece to reduce the flow of refugees or threaten to put the country in quarantine.
“The patience of many Europeans is drying up,” said yesterday the minister of the Interior of Austria Johanna ÎœÎ¹ÎºÎ»-Leitner, threatening Greece with temporary exit from the Schengen area, as pointed out in the relevant article of the FAZ.
“Apparent solutions will not help us to move on, said by the side of the German Foreign minister, Frank Walter Î£Ï„Î±ÏŠÎ½Î¼Î¬Î¹ÎµÏ. During yesterday’s sitting of the european council of Justice and Home Affairs, the German Interior minister, Thomas de Maiziere stated that Greece will need to settle the house and, indeed, in the next few weeks. In response to a question about the possible extension of controls at the German border and after May, de Maiziere said: “May is still far away”.
In its analysis, the newspaper “FÎ‘Î–” argues that the provocative words of Berlin against Greece which we have to settle the house of return, recalling that the corresponding expression was expressed in the crisis of the euro.
On the same wavelength with De Maiziere moved yesterday, and the Interior minister of Sweden, Anders ÎŠÎ³ÎºÎµÎ¼Î±Î½ who warned that, if a country does not fulfil its tasks, then you will need to limit the connection of the area of Schengen.
The German newspaper, however, that the exclusion of a country from the Schengen area against her will is legally unattainable, it considers, however, that there are opportunities for increased controls.
Greece will have to exchange the debt with refugees! This, at least… “original” proposal, made in today’s edition of the Financial Times, the columnist of the newspaper’s Gideon Rachman .
In such a case, he notes, we need Greece to agree to seal the borders to Europe and to keep those who enter the territory of camps that will be created on the islands and in return, Germany will have to accept to erase part of the debt. This is generally the reasoning of the columnist, who fails to parallel the situation as of today is created with the second World War.