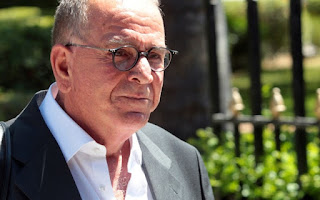 For changes in the composition of immigrants who come to Greece the deputy minister of Immigration…
Policy John ÎœÎ¿Ï…Î¶Î¬Î»Î±Ï‚ in an interview with the Free press.
“We have a new phenomenon. The Moroccans and the Algerians. It’s not every night, but it happens often and in large numbers that we had in the previous period” notes. “The Moroccan in Morocco need to learn that Osman went to Greece and came back” he points out.
Mr. ÎœÎ¿Ï…Î¶Î¬Î»Î±Ï‚ reiterated that the inflows of migrants and refugees is particularly high for the season, with 4 to 4.5 thousand people a day, without the Turkey to honour the commitments it has undertaken following the agreement with the EU.
“I get angry when I hear of Greece as a ‘loose ship’. The land borders are kept wonderful. In seafood, there’s nothing else to do except rescue when it comes to the boat. The problem needs to be addressed on the Turkish coast” he clarifies.
“It bothers me when anyone refers to the weaknesses of our country and forgets those of the EU,” added mr ÎœÎ¿Ï…Î¶Î¬Î»Î±Ï‚.
The minister announced that by the end of January I’ll have work the hot spots on the islands, expressing reservations only about the Kos due to the reactions of a section of the residents.
He added that most of the mayors with whom he collaborated well was not of SYRIZA. “The mayor of Byron said to give the theater Rocks. What to do? We are who we are a tragedy to go to the theater?” he wondered.
For the Victoria square said that the problem of the accommodation of immigrants has been dealt with after the evacuation and it hasn’t happened. The minister reiterated, however, that the square is “station of Munich”. “In Victoria square is around the banks, the soy, their friends, their communications… they Go there, sit in the morning, as the Greeks were going to the station of Munich. Our efforts are the squares belonging to the people may not be Ï…Ï€Î½Ï‰Ï„Î®ÏÎ¹Î±” explained John ÎœÎ¿Ï…Î¶Î¬Î»Î±Ï‚.
Source