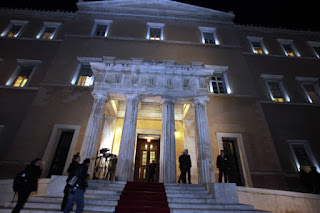 “The budget for 2017 as prepared has a short-term strongly recessionary character, although the Ï…Ï†ÎµÏƒÎ¹Î±ÎºÎ® effect may be partially neutralized…
with the change in the economic climate due to the integration of assessments” points out, inter alia, the Office of the State Budget to the Parliament in its report on the draft of the state budget of 2017.
The authors of the report suggest on the one hand, downward revision of targets for the primary surpluses on the other hand, a redistribution of the centre of gravity between taxes and spending in favour of the latter.
In particular, the report emphasises the need to reduce the targets for primary surpluses until 2018 and after.
“Therefore, the coming months will be increasingly important that the revision of the targets for primary surpluses downwards, and the final settlement of the debt. Government and opposition probably agree to this goal and have the help of the IMF”, it is distinctly noted in the report of the Office of the State Budget in the House.
The report states that the preliminary draft budget 2017 “is characterized by Ï†Î¿ÏÎ¿ÎºÎµÎ½Ï„ÏÎ¹ÎºÎ® austerity for achieving the goal for a primary surplus of 1.75% of GDP”.
And as noted “although, any reductions in spending rather than increases taxes would have probably had less direct Ï…Ï†ÎµÏƒÎ¹Î±ÎºÎ® impact, the most important thing is that the tax increases discourage work and entrepreneurship ( the supply side) and therefore blur the prospects of recovery”.
“However, compensatory actions, mainly from the government side it is possible to significantly reduce the Ï…Ï†ÎµÏƒÎ¹Î±ÎºÎ­Ï‚ effects of Ï†Î¿ÏÎ¿ÎºÎµÎ½Ï„ÏÎ¹ÎºÎ®Ï‚ policy adjustment. These actions in combination with a growth-friendly (and socially fair) plan to cut primary expenditure may lead to expansive fiscal adjustment” note the authors of the report.
With regard to the estimates for economic growth in the economy by 2.7% in 2017, the report notes that “forecasts for private consumption, investment and exports can be characterised quite optimistic” and that there are risks – internal ca external – that threaten their achievement.
Since the scope for horizontal spending cuts and horizontal tax increases have been exhausted, “the center of gravity needs to shift to a redistribution of taxes and expenditure” proposed in the report.
In this field, such as characteristics refers to “bases of the draft that stands out is the effort of the government to direct a significant amount of 871 million. only euro 2017 in the category of social benefits. Of these 571 million. billion relate to the newly-created Income of Social Solidarity and the rest of the 300 million. euro relate to interventions in the areas of health, social protection and education”.
In terms of the public finances, the report noted that currently “in a better situation compared to 2009 or 2010” but argued that “much will depend on the evolution of the insurance, the sustainability of which, according to many estimates is not guaranteed in spite of the latest changes”.