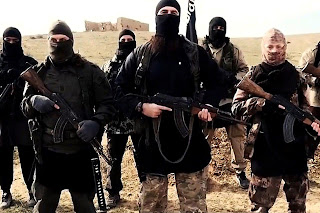 As the Islamic State threatens the world with the unthinkable acts of violence, all wondering what the future holds…
But in order to understand the action of the first need to refer to the depths of history. Until the Bible… at least This supports Rabbi Jonathan Cahn
According to the BBC, the terrorist Abu Musab Al-Zarqawi swore loyalty to Osama Bin Laden and Al-Qaeda in Iraq in 2004. After his death in 2006, Al-Qaeda created the Islamic State, and Abu Bakr al-ÎœÏ€Î±Î³ÎºÎ½Ï„Î¬Î½Ï„Î¹ became the driving force.
However, Rabbi Jonathan Cahn argues that the roots of ISIS go back much further, to the Bible!
“ISIS could be said to be the ÎµÏ€Î±Î½Î±Ï†Î±Î½Î­ÏÏ‰ÏƒÎ· of the ancient Assyrians, I mean, down to earth,” says Cahn. “Most likely, even more than Al-Qaeda, literally, most likely, is to have even the blood of the Assyrians in them.”
The Assyrians were the ones that specialized in amputations, according to Cahn.
“This is just what makes up ISIS.” says…
And it goes way beyond that by saying that there are more connections between the ancient Assyrians with today’s terrorists, stressing that
“A year ago, captured the city of Mosul, which was the biblical area of the city of Nineveh.