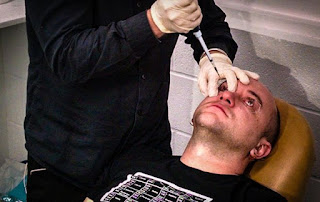 In 2005, an article in the prestigious Wired magazine heralded the advent of a new era where biology and the experiments should not be made only in laboratories. On the contrary, the scientific knowledge in this area should be democratised, to spread to the masses, tested in kitchens and garages, so we all have the right to taste the new developments. Like this was born the movement of biohacking, which aims to bring closer the scientific conquests to people who don’t work in the first line of investigation. And the goal is to benefit the latter in such a way as to achieve what they want through the achievements of the specific. As it says in the manifesto of the Î²Î¹Î¿Ï‡Î¬ÎºÎµÏ or Î²Î¹Î¿Ï€Î±Î½Îº, they want to break down the silos of universities and institutions spend millions of dollars in order to sell it later the valuable findings in companies through patents. Why only those and not each of us, is their motto. In short biology, and genital DIY (do it yourself). But how could this happen with a scientific object, which is usually accompanied by the phrase Dont try this at home. With what risks and what benefits? The scientific ethics of this underground movement divides. Many get excited with the prospect of Ï…Ï€ÎµÏÎ±Î½Î¸ÏÏŽÏ€Î¹Î½Ï‰Î½ forces, but even more are sounding the alarm by pointing out that we can’t play god. However, there are several pioneers Î²Î¹Î¿Ï‡Î¬ÎºÎµÏ and experimental laboratories which are already producing results. Let’s look at some examples. The group of Î²Î¹Î¿Ï‡Î¬ÎºÎµÏ “Science for the Masses”. They discovered that the chemical substance is Chlorin e6 (Ce6) has been detected in fish living in the depths of the ocean and has been used in various experiments since the 1960s, could help the human beings to dramatically improve their eyesight in the night. They managed to find a method where condensation mini-plants the substance and throwing as eye drops in the eyes, to achieve this purpose. A volunteer agreed to try it and indeed the method was a huge success as it was able to distinguish objects with very reduced light within a distance of fifty meters.

You don’t need the reins of experimentation to has a team. Even an educated man can if he wants to move the knowledge just a little bit further. The American Meredith Patterson has studied biology, and the house looks nothing like a sophisticated science lab. Thanks to the stubbornness of the has made great advances in themes which relate to food safety. Has developed a method thanks to which one can easily see if a yogurt has been infected by toxic substances and is suitable to eat and has done other experiments relating to the improvement of the intake of the human body in Î²Î¹Ï„Î±Î¼Î¯Î¼Î· C. H Patterson is considered to be one of the most influential members of the movement, as well as other features fluency and expresses the thought in a way understandable by all. If all this does not seem to be advanced, then what would you say if someone offered you a pill or an ointment that made you a smarter, more efficient at work, you improve the quality of your sleep and mostly avoiding the unpleasant consequences of time? Not a few followers of the movement who experiment with substances that offer them all, or anyway some of them. Anyway science has made a tremendous progress in the field, to help people suffering from degenerative diseases. Therefore, in accordance with the Î²Î¹Î¿Ï‡Î¬ÎºÎµÏ this kind of knowledge ought to be disseminated in society in another way so as to contribute to the increase of the cognitive means at our disposal. Before we grow old or sick to have the opportunity to be a part of Î²Î¹Î¿Î½Î¹ÎºÎ¿Î¯. Among those who are adventurous, there is the writer, Dave Î‘ÏƒÏ€ÏÎµÎ¹ who has written the best seller “Bulletproof Diet”, who claims that taking formulations improved the intelligence and, more importantly, he lost serious weight. Ray ÎšÎ¿Ï…ÏÏ„Î¶Î²Î³Î¿Ï…Î±Î¹Î» is the head of Google in the field of Engineering. He swallows every day more than 100 pills of various types, making combinations which give almost super powers to excel in a very demanding job.

The Areas Gentry is a Î²Î¹Î¿Ï‡Î¬ÎºÎµÏ who managed to be awarded by the White House in 2013 for its efforts to democratise the knowledge and the science. I was trained as a biologist but started to collaborate with an experimental lab that was in the staff. When a colleague died of cancer of the esophagus, decided to make an own laboratory with some of the institutions that bought it from the internet to a garage. Then did concentrations in which it called on all those who were interested in science, without being experts or graduates to take part. In a little community of friends and associates began to grow and her ideas spread very quickly. The same became popular. Decided to start something through Kickstarter, and so he gathered the resources he was looking for. Today has been a terrible space over 2500 sq. m in California called Biocurius, which is open 24 hours 7 days a week and has become the meeting place of Î²Î¹Î¿Ï‡Î¬ÎºÎµÏ and lovers of science.