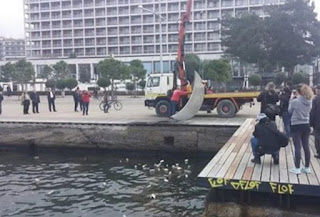 It was recovered today in the morning the famous, now, Moon of the New Beach in Thessaloniki, which last year was found in the… targeted by vandals who ripped out and thrown in the waters of the Thermaikos Gulf, last Tuesday.
The process of lifting started at 9: 30 in the morning and lasted about an hour. Two inflatable of the Greek Rescue Team was in the sea area. Two divers dived and bound with straps in the “Moon”, which is then pulled to shore crane of the Address Recycling the municipality of Thessaloniki.
The whole process was watching from the morning, the deputy mayor of Technical Projects, Recycling and the Environment Thanasis Pappas. Officials of the municipality and carrying the moon in the depot.
In accordance with the responsible deputy mayor, will be repaired and then, in consultation with the creator of the project will be examined in which part will be placed. “It is open to the possibility of the twinkle, twinkle little star on the Shore”, Paul’s work Vassiliadis, be placed at another point. We will discuss with the artist and in consultation with the mayor, we’ll see what we’ll do,” she said in Voria.gr mr. Pappas, who has made it clear that the change in the property â€“ if it happens – won’t take place due to the recent events with the vandalism.
In addition, according to the deputy mayor, the project was from the beginning at another point and after the regeneration of the beach was placed there. In fact, as underlined by mr. Pappas, the artist estimated that the project would be better in the sea.
The Î»ÎµÎ·Î»Î±Ï„Î¹ÎºÎ® fury of the vandal managed last week, after several attempts, to complete the “work” and to deprive the wooden platform of the New Beach, the “trademark” of the.
The work of the Î˜ÎµÏƒÏƒÎ±Î»Î¿Î½Î¹ÎºÎ¹Î¿Ï artist E. Vassiliadis was a long time ago doomed to constant vandalism. A year ago, in February of 2015, they attempted to saw through (!) the base of the. Last September, they broke down the main trunk, which was about to fall into the water, taking slope, particularly worrying. The previous Saturday, the vandals attacked again, bending his torso to the breaking point. The final blow for sculpture – jewelry came in Third in the morning, when the trunk of the, after a new attack, ended up in the sea.
Source