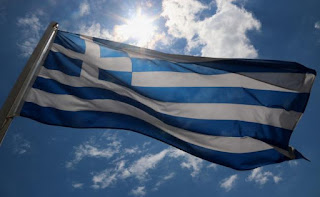 The intervention of the Police Directorate of Chios caused the complaint owner…
liquid fuel station in the centre of the city, that strangers, as a statement of the immigrants, downloaded, and then tore the Greek Flag that was posted outside the store on the road of Democracy.
In accordance with the visual material provided by the authorities, is depicted initially a man attempts to downloaded undisturbed the flag that is on the web. In spite of the efforts of not doing so some time later returns with a friend, who after some effort managed to download and take with them.
“We expected that this would happen sooner or later. New Year’s eve, one hour after we closed, came those “guests” and they did what they did. They’re trying to tear you apart. Finally they took her and logically or burned it or dumped it. This symbol has killed so many people and has spilled so much blood, and we arrived at this point,” said the “p” in the employee of the service station, Dimitrios Loizos.
Yes, the incident was reported to the Police, which is conducting investigations to identify the perpetrators, while prior to about 15 days the deputy minister of Rural Development had been openly placed by saying that : “The flag that we buy as individuals can not be regarded as a national symbol”, infuriating them all.
It is a good Police department to drop soon light on the case in order to isolate quickly those who have the aim of causing the delicate balance in the full local community of our island.